What Our Users Say

We asked our forum users what they thought of Fractal Terrains. You can see the entire thread for yourself here. Here are some highlights:

I remember that I was looking over various ads for programs like Terragenesis, Mojo-world, etc., for a project idea that I was mentally toying around with - and I came across a link on the net to Fractal Terrains Pro. I immediately wanted it because it looked to me like a great product with a lot of important features, the user interface on the demo version seemed very intuitive to me, and best of all, unlike it's competitors - it was extremely affordable.

Outstanding features? Wow - where AREN'T there outstanding features? I have a choice of tailor crafting or random generation, The graphics output is very nice, it's versatility of use with so many other applications (Profantasy and non-Profantasy apps) is extremely impressive, It's customizable by the user to perform beyond it's few "out of the box" limitations, the list goes on. What really impresses me is it's potential to give you "real world" data about your fictional, simulated worlds. Climatology, rainfall, elevation stats at point coordinates, just to name a few, are available to the user with little fuss or muss.

I like Campaign Cartographer, and FT Pro is a good partner program. Campaign Cartographer will give you a good decorative version of your simulation model, but FT Pro can permit you the opportunity to see what your worlds are like from a more realistic perspective. Comparing Campaign Cartographer 3 to Fractal Terrains Pro to me is like comparing Animation to live action. Different - yet potentially very complimentary - two halves of the same coin. As a texture generator for 3d model planets for 3d scenes and to make planet icons / blazons with - it's unmatched by anything else that I could possibly think of - as a matter of fact - I don't think that a "true" instant planet texture generator ever even existed BEFORE Fractal Terrains Pro.

Once I got it, I could remember just sitting for hours (yes, hours, I'm a geek of the highest order, and proud of it), fiddling with the controls, see what did what, hitting next, next, next, seeing what worlds popped up, thinking "I can put a city here, and there, and this area would make an awesome country...

I knew that it could export to CC3, it said so on the "box", as it were, but finding out what map levels were all about (thanks, Joe Sweeney!), and realizing I could take that whole planet and then subject the power of CC3 to it, it was almost overwhelming. I could map a world practically down to the square mile if I wanted, with all my imagination poured into it. Even now, though I've owned it for years, I still get goosebumps.

I still consider it one of my best software purchases ever.

I can't say enough good things about FT to be honest. It's a fairly straightforward program that has the power and flexibility i was looking for. Yes, there is some learning curve. Not being a rocket scientist by nature or training, if i can figure it out, the vast majority of humanity can too :-)

The power of the platform (especially with the Terraformer 0.5 package) easily outweighed the learning curve. I would very much suggest getting the Terraformer add on if you are really interested in creating realistic looking worlds.

I could go on and on, but then you all would think it was a paid advertisement instead of a geek gushing about computer goodness :-) 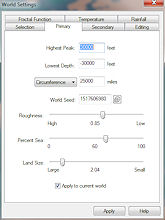